The western Highlands of Guatemala form a jagged and verdant landscape of mountains and people, tradition and change. The greenery it boasts is flecked with small towns, which fade quickly from street to field to wall of forest, again. In a country that flirts auspiciously with the Equator and the Tropic of Cancer, the temperatures of the western Highlands region are buffered only by its lofty altitude. Add a layer or two of rich volcanic soil and you are left with an ideal climate for growing coffee. Which everyone does.

The smell of coffee lingers in the air of San Pedro la Laguna and its’ brethren ringing Lake Atitlan. But, before you get lost in reverie, let me stop you. Forget that earthy, warm, promise-of-caffeine smell to which you are accustomed. We are not in Kansas anymore. This is the smell of something sweet, a little too sweet; the smell of the unappreciated coffee berry. The smell of fruity husks discarded and left to break down in forgotten piles – the mere fruit wrapper around the valuable bean. 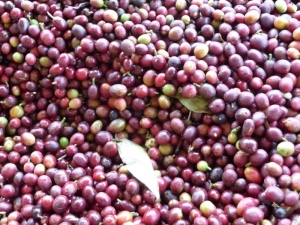 Looking around you’d be sure to notice the many vacant lots and slivers of land which have been appropriated for sun-bathing beans. Having soaked for days, they now lay drying under the uninterrupted gaze of the Guatemalan sun. When dry, they will finally be ready for roasting — and for export as a valuable commodity crop. 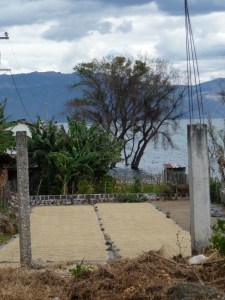 The hills of the Western Highlands are carpeted with coffee trees. Perhaps that doesn’t sound as staggering as it is.During the 2012-2013 season, the world’s top 10 coffee producers, of which Guatemala is number nine, will export 146 million bags of coffee (Bloomberg, 2012), otherwise known as 23.8 billion. pounds. of. coffee. The hills are carpeted in Coffea Arabica.

In his book Botany of Desire, Michael Pollen forwards the theory that the most successful plants in history are those that appeal to humanity in some way, the ones that make themselves desirable to propagate and spread. Apples have sugar, potatoes calories, tulips beauty, and weed has, well, what weed has. Surely, the delicate Coffea Arabica must be included in this list. It has not spread to every tropical region in the world on vim and vigor alone. So, hats off to the humble coffee berry and the noble bean. Up next — Vol. II, Consumption.